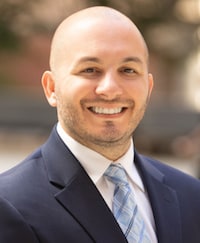 Mr. Iorio counsels clients who have suffered financial losses arising out of unsuitable recommendations, material misrepresentations and omissions, failure to disclose conflicts of interest, elder abuse, fraud, and other violations of state and federal securities laws and regulations. He pursues claims nationwide on behalf of investors to recover investment losses.

Mr. Iorio also counsels whistleblowers with credible information regarding fraud or other violations of federal securities laws to preserve eligibility to receive a whistleblower award under the SEC's Whistleblower Program.

In addition, Mr. Iorio's practice includes representing financial professionals who have disputes with their employer or former employer.

Mr. Iorio earned his J.D. from Seattle University School of Law. During law school, he served as a law clerk for the United States Attorney’s Office for the Western District of Washington. He also advised small businesses through the Ronald A. Peterson Community Development and Entrepreneurship Law Clinic.

He is also a graduate of the Smeal College of Business at Pennsylvania State University, where he received a Bachelor of Science in Finance. He was a repeated Dean’s List Member and also studied international business and political science.

Mr. Iorio is admitted to practice law in New York.

Contact Us
Investor Claims
Client Reviews
★★★★★
We had a wonderful experience with Mr. Jorge Altamirano, who is an excellent and competent lawyer. He took care of our case with high effectiveness and professionalism. Mr. Altamirano is always available to answer any questions from his clients and always provided us the appropriate follow-up in our case. It was an honor to have his professional services. Ana & Rolando M.
★★★★★
My experience in the past with attorney Jorge Altamirano, was excellent. He was highly competitive and professional. He was attentive, communicative, respectful, and kind from beginning to the end of resolution of my case. One of the most impressive attributes of this gentleman was his empathetic demeanor towards me, his calmness throughout all the process of my case. Dr. Mayra R.
★★★★★
The professional and outstanding guidance and assistance that Jorge Altamirano provided during my case was a key element towards a favorable negotiation. He was always vigilant of the case deadlines. I would work with him again in the future. Johnny M.
★★★★★
In our case, Mr. Altamirano showed integrity and professionalism, which without a doubt will help your future outcome. Ciso C.
★★★★★
Mr. Altamirano is very knowledgeable, responsible and reliable. I am very satisfied and grateful with the outcome of my case. Elsie D.
★★★★★
People who are the victims of broker fraud have to go through a complicated arbitration process which requires them to trust their attorney and take a lot on faith. August Iorio worked with me and my wife navigate the process, helping us get all the information his firm needed for what turned out to be a successful outcome. He was understanding and professional every time we dealt with his firm. Mitchell & Irene F.
★★★★★
I am extremely satisfied with the services received by Iorio Altamirano LLP. They are people with a high ethical level, very professional, and great human quality. I highly recommend their services. Eric M.
View More
Submit a Law Firm Client Review